The Dieppe Kite Festival is LEGEN – wait for it – DARY!

The Flying Squad have been visitors to the festival for a number of years and look forward to returning with eager anticipation. Â This year was no different. Â The festival is on an epic scale and too big to cover all of it here so we will just tell you about the sport kite flying at the the Chateau end of the field.

We arrived on the Newhaven ferry on Friday afternoon. Â Already the field was a hive of activity and the last of the infrastructure was being installed. Â  Too early to check into the hotel, we took the opportunity to get in a spot of practice. Â The wind was smooth and from the sea and by the end of the fly we all had big smiles that stayed there for the rest of the week!

The mornings start on the field with free flying. Â This year the wind in the mornings proved challenging, usually coming from the town and being very light. Â The wind normally changed direction and picked up with the turning tide around mid day. Â This was great for us and great for the crowds who were able to get the best view of the demos. 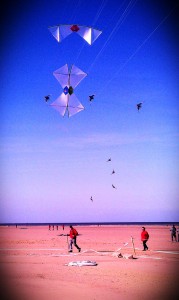 On Saturday the wind was very light, no problems for “The Squad” as we are lucky to have the first four prototype Helium Revolutions being developed under licence by Los Hermanos Show Kites. Â  These kites are super light and super responsive and allowed us to fly routine after routine even though the flags around the field were hanging straight down. Â What a kite!

The rest of the week saw better winds in the afternoons and all the demo teams Â put in outstanding performances. Â We saw multiple kite flying fromÂ Jean Lemire (CAN), beautiful pairs “tails” flying from a Aerial (F) and outstanding individual ballets from Steff Ferme (F). Â Dual line team demos from Panam ‘Air (F) and the combined talents of Lisa Willoughby (USA) & Steff Ferme. Â Then of course there were the Revolution fliers.

Over the last few years Rev teams have increased in number and Â Dieppe was no exception. Â So, as well as us, we had Team Loustiks (F), Now’Air (F) and Team Fusion (UK). Fusion were assisted for the first half of the week by Ashley and Martin from The Decorators. Â Between them they flew not only the Fusion routines but also some of the famous Decorator routines. Â It was simply magic to watch. 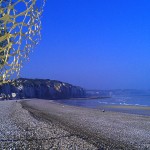 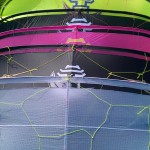 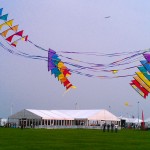 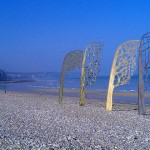 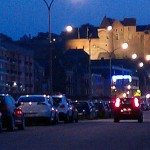 The kite teams and individuals all put in great performances that were seamlessly put together by the hard (very) working team from the festival. Â The seemingly tireless Field Director Renaud ensured that everyone had a slot on the program and knew when it was their turn. Â The PA team who were always ready with the right track set up the system each day. Finally, but by no means least, the wonderful commentary fromÂ JeanÂ Lamoureux (CAN) who seamlessly switched between French and English not only informing and entertaining the crowds but also helping the non French speaking teams know what was going on.

On the boat on the way home we talked about our favourite moments of the kite festival. Â It started to sound a bit like a Monty Python sketch – Â  So, apart from

……..WHAT WAS YOUR FAVOURITE PART OF THE FESTIVAL?

We would like to say a huge thank you to everyone involved in organising and running this event and thank you to our kite friends who make this the wonderful kite mecca that it is.

See you next time. 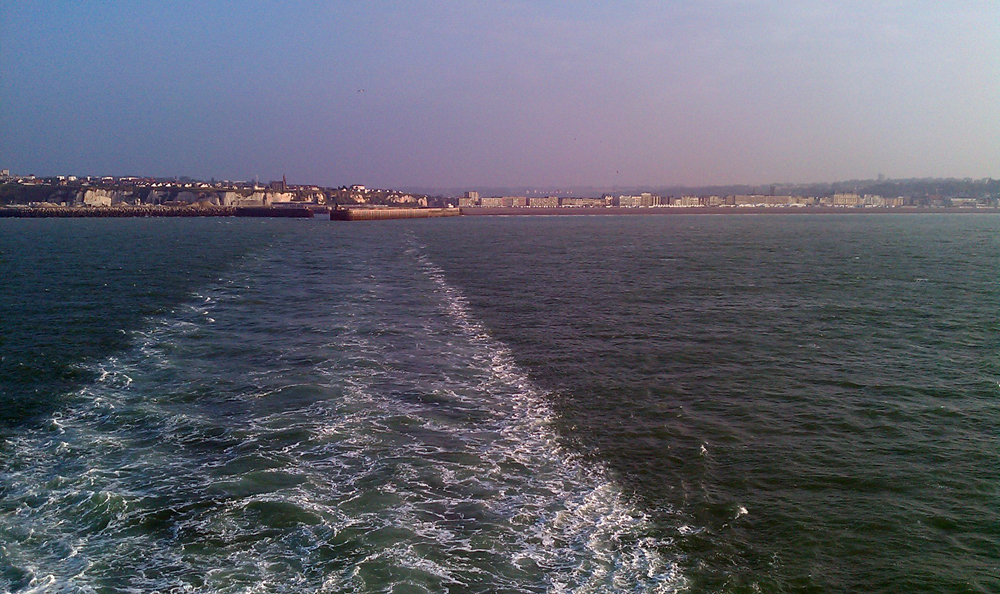